What’s all the fuss about?

Written by T. Rigby, Director of Forward For Life. November 2016

November 19th 2016 celebrated another International Men’s Day. Inaugurated in 1999, this day is celebrated in over 80 countries including the UK. But you might be thinking…”What’s the fuss all about?” After all this is a man’s world, ruled by men for the benefit of men. But is this the story for ALL men?

November 17th 2016 witnessed a House of Commons Parliamentary Debate in advance of International Men’s Day. But it was much less about celebrating men and much more about asking hard questions as to why men were finding it so hard to survive…and there’s good reasons to ask these questions – because in this so called patriarchal society, the benefits of being a man in today’s world are not so easily straight forward to highlight.

To be frank, there is a need for a proper fuss when it comes down to men in modern day UK and here’s why…..

When asked, what steps the Government plans to take to improve suicide prevention policies in response to the statistics, this was their response…

The Government has invested over £1.5 million on suicide and self-harm prevention research since the National Suicide Prevention Strategy to inform and target our strategy for reducing suicide rates.

But this is surely a drop in the ocean compared to the magnitude of the challenge at hand. Over 4,500 men take their lives each year in the UK. Each suicide attempt has an immeasurable emotional cost on family, friends and the wider community.

But let’s be brutal from a “typical man’s” view, let’s look at the pounds, shillings and pence – the economic cost. The estimated cost for each death by suicide is £1.6 million pounds – it therefore beyond belief as to why an investment of £1.5 million in research over a 3 year period is somehow proportionate to the magnitude of the issue at hand.

Lets do what need’s to be done.

The other question we must ask is whether this amount of investment in research is money well spent. I’m not saying that research isn’t important, but what I am saying is that at some juncture we need to draw a line in the sand. Maybe, stop asking so much “what else can we know?” and start asking “what do we need to do based on what we know now?”

The answers, I believe, were staring the parliamentarians in the face today as the rest of the debate regarding men and their situation gave clear statements as to what specific wider issues in society need to be addressed if we are to tackle suicide amongst men.

The areas discussed, that made grim reading, covered the following:

The size of the challenge

The challenge is bigger than most of us would like to admit. Individual blame is too short-sighted; we need to look at ourselves and our taken for granted assumptions as to who men are. To me, it appears that the silent majority has been overlooked and no one is responsible for dealing with this oversight.

If this is a man’s world, then why are so many men taking their own lives?

To get your copy of the full parliamentary report and debate pack from from 2016 then click on the image below. 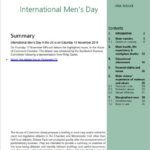