16% of the GPs felt that suicide could have been prevented

Many may have missed it, but in March 2014, the National Confidential Inquiry into Suicide and Homicide by People with Mental Illness (NCISH) produced what for many in the suicide prevention arena was a breath of fresh air – A publication that outlines clearly the challenges faced by Primary Care and all our communities in identifying and supporting people who may be considering suicide as a realistic option.

To date, Suicide and its prevention has very much been seen as the remit of mental health services with an emphasis on those services being all they can be so to best prevent suicide.

This report however clearly demonstrates that the responsibility of suicide prevention is not solely in the hands of mental health services, and nor should it be. It is everybody’s responsibility – a joined up responsibility across all sectors and all our communities.

We need to remember that suicide is not a mental illness, nor infact, are all suicides undertaken by people who are in touch with mental health services or have ever had a diagnosed mental illness – some would even go as far as to argue that for some who die by suicide, the act could be seen as a rational undertaking with no relevance to mental illness at all.

The only real “known known” is that one suicide is one too many and in today’s society, nobody should find themselves at such a level of despair that the only option they feel they have is to die by suicide.

But, suicide is everybody’s responsibility – it can’t, and shouldn’t all be laid solely on the shoulders of the GPs and mental health services – it is an unrealistic ask – we all need to do our share – from Public Health to the Police, from the Voluntary Sector to the Education sector, from our local politicians to our very own families and friends.

If you want to know what we are doing at Forward For Life then get in touch with us.

If you are worried about someone or have thoughts of suicide yourself then seek support now. Go to our Resources section for more information. 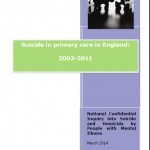