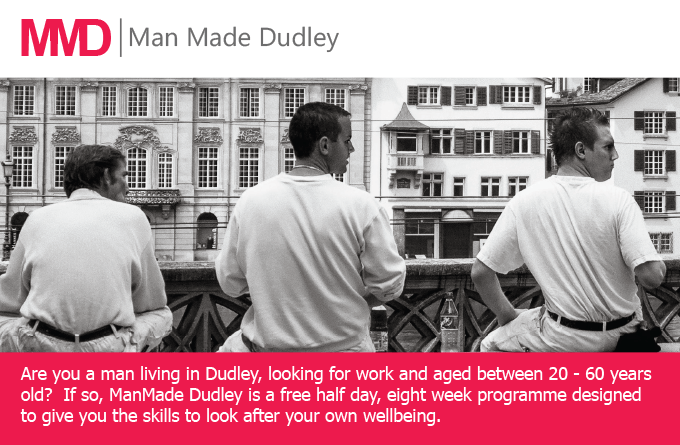 Men can have it tough. When a man loses his job he can so easily lose so much more – his self esteem, his identity, his friends, his wider social links, his purpose as well as the material things in life that many of us take for granted. But sometimes, he can lose more – he can lose his life.

The ManMade Programme came back to Dudley in December 2015. But this time it came with a twist.

Again, wth an emphasis on hope, opportunity, resilience, confidence, wellbeing, interaction and inclusion, ManMade was successful in gaining funding from Dudley Metropolitan Borough Council Office of Public Health to run the programme once more, but this time it's the members who were driving this opportunity forward.

ManMade proved to be so succesful first time round at the beginning of 2015 that the men who took part in it wanted to give something back – that something being themselves. They set up their own recognised member led group and sucessfully won a small grant from Dudleys Office of Public Health to make ManMade Dudley (2) a reality for other men in Dudley.

With ongoing support from Forward For Life, Common Unity and Grassroots Associates, this groundbreaking approach engaged men who were struggling with life and all it threw at them.

Using the Warwick and Edinburgh Well Being Scale, the ManMade Dudley Peer Supoport yet again proved to be an enormous success with the men engaging with programme clearly beniffiting from the process of engagement utilising a tailored approach thyat spoke to men and enabled them to speak up for themselves.

If you want more information about ManMade or any of the work we do at Forward For Life then don't hesitate to GET IN TOUCH.