Suicide is not a selfish act 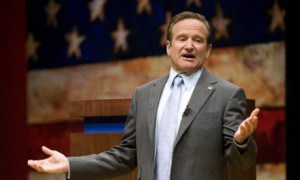 On the evening of the 11th August 2014, the world was shocked and stunned by the tragic news that Robin Williams had died. The initial suspicion of this being death by suicide was confirmed only the day after.

The world mourned and still does – Social Media across the world went into melt-down with images, condolences and outpourings of grief dominating our screens. The loss was further amplified through extensive radio broadcasts, television news bulletins and dedicated programmes with the rich and the famous lining up to give their testimonials of personal grief and personal stories; Even a hastily re-worked shelf stacking flurry of activity in a local video/audio store was undertaken (and I’m sure replicated elsewhere) where the whole back catalogue of Robins’ work was displayed in all its glory for potential customers to take note and hopefully purchase in the name of nostalgia. I was inundated with phone calls, text messages, twitter feeds, emails and face to face statements all sharing a common grief, a common sadness, a feeling of despair and absolute disbelief at what had occurred…the abbreviation of “O.M.G” has been abused to the point that it would need respite and plenty of “T.L.C” before it could be placed tentatively in the public domain once again though with a blatant public warning as to its current level of fragility since the loss of Robin.

But it can’t stop there. We have to categorise, we have to have a reason, a box to place this particular challenging instance within so we can comfortably give it meaning….give it a rationale. Indeed, for a person who appeared to have so much going for him – an “A List” Celebrity attributed such high regard across the world that his name was deemed synonymous with comedy across generations – the public thirst to know why and how such a tragedy could occur had to be realised and advertised widely. We needed to understand what could possibly lead such an iconic figure to consider and undertake death by suicide. Severe depression was given as the reason and this has all been a very public affair.

The painful toll that depression leaves in its wake after its persistent drag across society cannot be under-estimated. It destroys lives on so many different levels and is rife across the globe knowing no boundaries and respecting no particular group. But, just as rampant is the toll of suicide itself. Suicide, similarly, knows no boundaries and impacts across the world. Mental health, or more precisely, mental illness, has a huge part to play in the story of suicide but it is not all of the story. Many people who take their own lives are not known to mental health services, have received no such diagnosis. Now in part this could be a failing of society and the stigma that is attributed to mental health problems but it does not account for all suicides.

Suicide takes over a million lives per year globally. In the UK, that equates to 6000 suicides each year with 75% being by men – that’s 12 men and 4 women everyday in the UK. For suicidal behaviours – being a suicidal act that does not end in the death of the individual, it is estimated conservatively as being at least 100 times the number of suicides completed each year. This is what Forward For Life call The Biggest Elephant in the Room. Something that we can all see, and effects us all, yet we don’t talk about nor acknowledge it. But it appears that there is a caveat here; one where if a person who suicides is cherished by many, the world will listen, take note and grieve.

At Forward For Life it is our core goal to prevent suicide. An important aspect of that is challenging the stigma that perpetuates societies regarding suicide – a stigma that in effect is a catalyst for future suicides with an ever pervading undertone of damnation and shame being brought down on individuals, families and communities that experience suicide in their midst.

Media, in all its presentations in the past, both virtual and real, have played an ongoing role in maintaining this stigma – words like selfish, uncaring, thoughtless, pathetic, weak, useless, evil, possessed have been mercilessly attributed to individuals that have attempted or who have completed suicide. The only time I saw the word Selfish used in the context of Robin Williams death was a Guardian report that stated, that Suicide is Not A Selfish Act.

So what is this about? Is it that suicide is not a selfish act when they are known and loved in the public domain? I think not. This would be a ludicrous hypothesis to condone and besides, there are still a minority out there who continue to stigmatise regardless of the status of the person who died by suicide.

At what point do we consider suicide and the prevention of it to be a priority that is everyone’s business?

1 thought on “The Very Public Affair of Suicide”